There were two main reasons why Europeans began sending people to explore the unknown areas of the world by the end of the 15th century. First, there were a number of inventions that allowed for better navigation techniques. 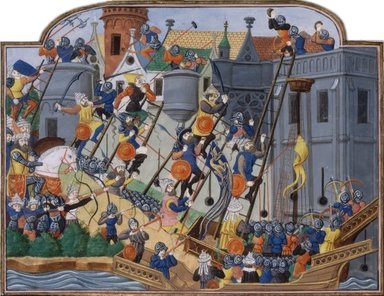 ​Second, the cost of goods from Asia became much more expensive after the siege and fall of Constantinople by the Turks in the middle of the 15th century. The increased cost led Europeans to search for a passage or route that circled the entire globe. ​
These trips or voyages were financed by the kings of Western European Kingdoms, especially Spain and Portugal. These kings were able to do this because they started collecting taxes from their subjects (people who lived in their kingdom). The ability to collect taxes is part of a process known as "centralization of power" that happened in western Europe.

The centralization of power during the Modern Era (1500-1789) led to an increase in population, changes in agriculture, and growth of industry. The quality of life generally increased for peasants during this period.  There was also demand for more goods, which led to strong competition between merchants from Asia. And, in order to purchase goods, people began using metal coins (money). The increased demand for coins meant that people needed to find new sources of gold and silver, which is another important reason Europeans began exploring the world.
​

By the 16th century Europeans had the technology, the financial ability, and the motivation to begin exploring the world beyond their knowledge. The exploring was not just for the sake of exploring. It was mainly to acquire new lands and riches for the kings of Europe. For example, when Christopher Columbus landed on the island of Hispaniola in 1492 one of the first things he did was to claim the land for the king and queen of Spain.

​The English and Dutch also had a number of people explore the water and lands of Canada in the late 16th century and early 17th century. Look at the map on page 75 and see if you can find examples of commemorations of these explorers.

Cartier's second voyage was much larger and ambitious. As we can see here, ​Cartier travelled much further inland, going as far as Hochelaga (Montreal). Cartier brought with him three boats and 112 men with goal to discover riches so that he could convince the king to finance more voyages and a colonization project.

The winter was extremely difficult for Cartier and his men. They stayed near Stadacona (Quebec City) despite warnings from the natives that this was a dangerous place to spend the winter. Twenty-five of his men died that winter and many more became very sick. Only the generousity of the Iroquois and their medicine prevented even more deaths.

Despite the aid from various natives during this and his previous voyage, Cartier tricked a number of them, including Donnacona, and brought his sons to France against their wishes so that he could use them to convince the king of the riches that existed in the new lands.
​ 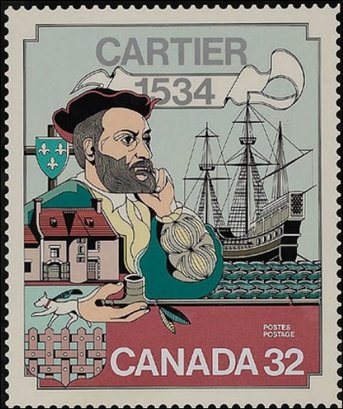 When Cartier returned five years later he did so with two new missions. First, he was to establish a permanent colony in the St. Lawrence Valley. Second, Cartier and his men would set out to convert aboriginals to catholicism.

Cartier began searching for the gold and diamonds he believed to be in the area. However, Cartier only found quartz and "fools gold". Many in his crew began to once again become sick. To make matters worse, Cartier and the French were not able to establish positive relations with the natives due to the French not respecting aboriginal traditions. Instead, Cartier and his men attempted to coerce First Nations with force as if the land already belonged to them.
​
The third voyage ended up being a compete failure and Cartier and his men left to return to France without accomplishing any of their goals.
Jacques Cartier Source: Library and Archives Canada/MIKAN 2267030