Jacques Cartier was the first explorer to explore what would become Canada, but he wasn't the only one. Explorers representing the English, Spanish, and Portuguese also tried to claim new lands for their kings.

The French, however, were able to establish permanent settlements along the St Lawrence River in the 17th century. This was primarily focused on economic goals. In other words, permanent French settlers were supposed to make money for the King of France. And the most profitable way to do this was through the Fur Trade.

​The Fur Trade become very profitable for the French. One reason for this was simply that they recognized the value of beaver pelts. The French also worked with Natives, which provided an inexpensive labour force (workers). And, very importantly, the French had access to a vast network of rivers and lakes that allowed them to quickly travel into the continent. ​

ECONOMY
Mercantilism was a new economic policy in the 17th century that was used as a way for European Kings to raise money. In amercantile system the colonies were seen as a way to enrich the kingdom. From the perspective of the crown, the system was viewed as successful when there was a flow of riches towards the King. One of the negative consequences of this approach was that it only required a small population. This limited the French's ability to expand its territory.

The system depended on an unequal exchange between the colony (New France) and the metropolis (France). The metropolis required raw materials from the colony, which they would use to manufacture more expensive finished products in France. For example, colonists would send beaver pelts (raw material) to France. French manufacturers could then use the beaver pelts to make hats (finished product). The French government maintained this imbalance by banning some manufactures in the colony.

In exchange for an annual payment of duty to the king, companies were granted a monopoly over a resource in the colony. A monopoly is when only your company is allowed to sell a specific product. ​ 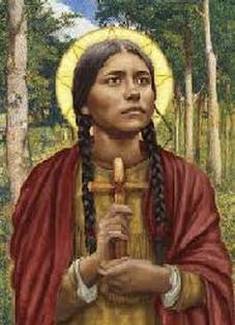 RELIGION
​
Religion was also seen as an important justification for colonization. Missionaries, priests who went to the colony to convert natives to catholicism, were among the first people to settle in the new lands.
There were at least four reasons
The Mohawk Saint - Catherine Tekakwitha Very few natives converted to
​ Catholicism but Catherine Tekakwitha is a notable exception.

​3.2 Colonization of the St. Lawrence Region

Although the French were fairly successful at establish territory for the Fur Trade they were unable to expand beyond a few trading posts.  This weakness was caused by on ongoing war with the Iroquois and the French reliance on the Huron (Algonquin) trade networks.

​3.3 The Complexity of the Fur Trade

In its early years, New France was what is called a trading post colony. This means that the goal of the colony was not to grow in population or complexity. The goal was to take resources from the land for the metropolis, France. A populating colony, on the other hand, describes a colony that grows its population, develops its methods of governance, and encourages a diverse agricultural-based economy.

The success of the French depended largely on its alliances with the Huron and Algonquin. These alliances, however, put the French into conflict with the Iroquois, who were aligned with the Dutch. In 1649 the Iroquois attacked Huron villages and completely destroyed the Huron nation within a couple of weeks. Encouraged by such swift victory, the Iroquois attacked other groups and quickly came to dominate a huge territory of land and with it, the fur trade.
While the establishment of the fur trade was successful in raising revenue for the King it had a devastating impact on First Nation societies. There were three elements in particular that negatively affected natives traditional way of life::
Exercise:
We have now completed Chapter 3. Use the remaining time in class to answer the review questions on p 110 - 112.