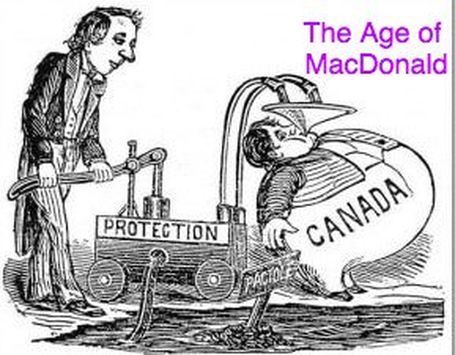 Quickly after Canada became a country it faced a severe economic challenge. There was an international economic crisis that limited the amount of exports Canadian manufacturers could sell to other countries. In Canada, many businesses went bankrupt or were taken over by larger companies, leading to monopolies and cartels in many industries (less competition = higher prices). Unemployment was also a big problem and many people left Canada for the United States.

The solution Macdonald came up with was the National Policy. This policy, which was enacted (started) in 1878 included:
The goal of Macdonald's National Policy was to develop an autonomous Canadian economy by increasing the size of the population and encouraging Canadians to purchase Canadian products.

Macdonald's support for railroad construction had a huge impact on the development of Canada. By 1886 the railroad stretched from "sea to sea",  reaching all the way to the Pacific Ocean on the west coast of Canada. In fact, the construction of this railroad was one of the conditions British Columbia had for joining Canada, which it did in 1871.

The construction of the railroad, however, also caused some problems for the Canadian government. First, it went heavily in debt to pay for its construction. Secondly, it sparked what is known as the Red River Resistance, led by Louis Riel.
The reaction to Riel's execution demonstrated that there were still many differences between the French and the English in Canada. The French identified with the Métis because the Métis spoke French and were Catholic. Most English Canadians saw Riel as a traitor to Canada that deserved to be executed. ​
​

Economic and Social Changes in Quebec

There were many changes that occurred in Quebec after confederation. Although not necessarily the consequence of joining Canada, the development of Quebec was certainly impacted by various Canadian policies.

Characteristics of the First Phase of Industrialization