The Second Phase of Industrialization

A new phase of industrialization began in Quebec around the start of the 20th century. Like the first phase, Quebec became more urbanized during this period. In fact, it was in 1921 that the urban population outnumbered the rural population. The Catholic Church continued playing an important role in the unionization of workers, many of which moved to new settlements. Many of these settlements grew nearby mines in places like the Eastern Townships and Abitibi. 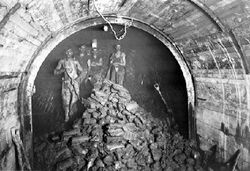 The main industries during this period all worked with natural resources, such as trees, metal ore, and rivers, that are found around Quebec. Industries such as pulp and paper, mining, and hydroelectricity provided many jobs. These industries all require large investments (money) to begin, most of which came from the United States. This differed from the first phase of industrialization because most investments came from Britain at that time.

Most unions were affiliated with larger North America federations. This was due in part to the growth in size of companies from mergers into powerful cartels. As businesses became more powerful, unions needed to become more powerful to help workers achieve safe and fair paying work conditions, Catholic unions, which were influenced by the church, were also created during this period. 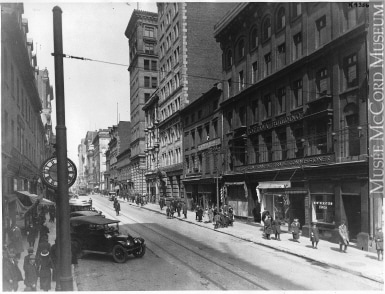 Montreal continued to be the most important city in Canada. Its population expanded as many unskilled workers came from rural Quebec or from parts of Europe (UK, Italy, Greece, Germany and Eastern Europe). Parts of the city were slums as many workers struggled to survive despite working long hours. Part of the problem for these workers was that well paying jobs required some kind of qualification (training, education, experience). The provincial government tried to improve the situation by building new infrastructures like electricity, parks, aqueducts, roads, etc. It also passed laws on work related accidents and public welfare.

The Politics of the Period

Although Canada became a country in 1867 its foreign policy was still largely controlled by Britain. A growing number of Canadians were opposed to this and, as a result, a conscription crisis occurred at the start of WWI (1914). Canada was still part of the British Empire and this meant that when the British declared war on Germany, Canada, like other Dominions (Australia, New Zealand, and South Africa), were required to fight with the British. Canada's entry into the war meant that the military needed soldiers and this meant conscription (compulsory military service).

The Conscription Crisis highlighted divisions that existed in Canada about its status in the British Empire. These divisions were largely, although not exclusively, along linguistic (language) lines. Because of these differences the relations between English and French Canadians deteriorated (became worse).
​
Conscription was enacted by the Conservative government during the war and this had major political consequences in Quebec. Because the French were generally opposed to conscription the Conservative Party lost its support in the province. This allowed the Liberal Party to politically dominate the province for many decades until the 1980s.
​

Consequences of the World War I  in Canada