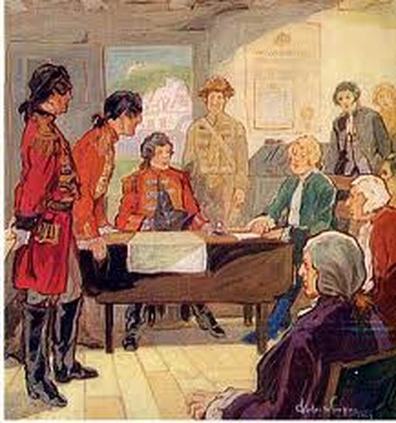 The British conquest of New France caused a number of immediate changes. One of the first acts by the new colonial leaders was to change the name from New France to the Province of Quebec.

Although the British were now in control they quickly realized that there were a number of challenges that limited their ability to make a "British" territory. One of the greatest challenges for the British was the demographic reality that the vast majority of the people living in Quebec were French Catholics.
The Royal Proclamation of 1763 was the first attempt to make Quebec like other British colonies. The proclamation reserved land for First Nations and laid out the new political structure for the colonists:
It also attempted to weaken French Catholic society in significant ways. First, it eliminated the tithe (the ability of the Church to collect taxes) in order to make the church poorer and weaker. The proclamation attacked Catholic beliefs by requiring a Test Oath to be sworn by anyone who held an important governmental position. The oath meant rejecting fundamental Catholic beliefs. ​

These changes were largely made to make the colony more "British". The hope was that this would attract more people from Great Britain to move to the colony, which would help assimilate the French population.

Reactions to the Change in Empire 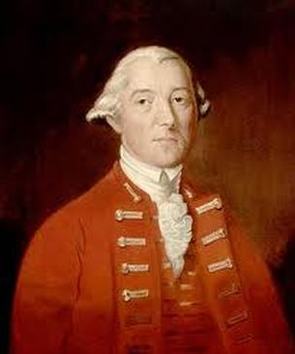 Implementation
The new governor of Quebec, James Murray, realized that many of the ideas of the Royal Proclamation were not possible to implement. Murray, therefore, tried to appease les Canadiens by:
This approached satisfied most French inhabitants but it angered British merchants who felt Murray wasn't doing enough to make the colony 'British'. The merchants were able to get Murray removed and install a new governor, Guy Carleton. However, Carleton quickly adopted many of Murray's policies because they worked so well. ​
Guy Carleton

The creation of the Quebec Act (1774) was an admission by the British crown that his earlier policies simply did not work in Quebec. The new act tried to use already existing power bases (church, seigneurs). This new constitution, which defines what a government is, included the following:
-The Quebec Act became effective as of May 1st,  1775.
​
Another very important aspect to the Quebec Act was that it dramatically increased its territory

"No taxation without representation."

The conquest of New France changed many things on the ground in North America and helped lead to the thirteen colonies declaration of independence from Great Britain. Two of the most important changes were the expansion of Quebec's territory and the collection of taxes by Great Britain to help finance the Seven Years War.

In 1775, an American army invaded Quebec and seized Montreal. The American remained in Quebec until they were driven out of the colony by British reinforcements in the spring of 1776.

Great Britain refused to recognize the independence of the United States until 1783 with the signing of the Treaty of Versailles. As part of the peace treaty, Quebec lost all of its territory south of the Great Lakes.. This victory by the Americans would allow them to eventually expand all the way to the Pacific Ocean.
​

There were many people who lived in the thirteen colonies who wanted the British to win the war. These people are known as the Loyalists because they remained loyal to the king. Once the American were victorious, these people found themselves in a difficult situation. Many of them left the United States and moved into the western part of Quebec (Ontario). These 50,000 English speakers greatly changed the demographics of Quebec.